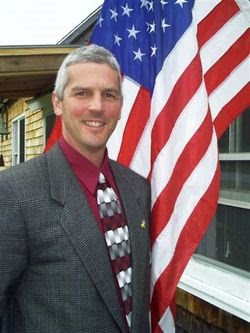 Will Cowie died this week. He was killed in an electrical accident on a jobsite in NY.

Jon Easton founded this blog, with a lot of help and input from Will. They let me join the club. I had a lot of fun with them; smart, funny, feminist, men.

One of my favorite memories of Will is from the summer of 2005. Former NH Governor Benson had asked the legislature to form a commission to study same sex marriage in NH. The commission had some public hearings around the state. The first one was in Littleton, chosen undoubtedly because the GOP controlled commission expected low turnout, and a lot of redneck northern hicks talking about sin, and doom. What they got was a room filled with over 100 people. There were 6 who testified against marriage equality. Early in the evening, a tall, good looking man in a suit, with a military haircut, and carrying a Bible came in. Most assumed he was there to expound on how same gender marriage would be an affront to God.

That man was Will Cowie - who explained who he was, and how he felt - which was that we are all equal, and should all have the same rights and privileges, and he didn't see anything in that book he was holding that said otherwise.

I loved Will. I'm going to miss him.

EDIT: If you miss Will's voice you can do what I do. Go heAR.

Maybe he just has a wide stance...

After reading briefly from the final book, "Harry Potter and the Deathly Hallows," she took questions from audience members.

She was asked by one young fan whether Dumbledore finds "true love."

"Dumbledore is gay," the author responded to gasps and applause.

A fork in the eye to all the radical zealots who had her books drummed out of librarys and schools. Thank you Ms. Rowling for introducing a generation of video children to the magic of reading and for showing even more that yes, people you respect and admire are sometimes gay. Deal with it.

The mission of Catalog Choice is to improve the efficiency of catalog distribution by reducing the number of repeat and unsolicited mailings, and to promote the adoption of sustainable industry best practices.

Nearly half of the planet’s original forest cover is gone today. Forests have effectively disappeared in 25 countries, and another 29 have lost more than 90% of their forest cover.

If steps aren’t taken to protect them, rainforests around the world could disappear within 40 years.

Covering less than 2% of Earth’s surface, rainforests are home to more than half of the world’s plants and animals.

More than 1 billion people living in extreme poverty around the world depend on forests for their livelihoods.

Deforestation contributes between 20% and 25% of all carbon pollution causing global climate change.

Over eight million tons of trees are consumed each year in the production of paper catalogs. Most Americans oppose fully funding President George W. Bush's $190 billion request to fight the wars in Iraq and Afghanistan while a majority supports expanding a children's health care program
he has threatened to veto, a Washington Post-ABC News poll shows.

Bush's approval rating stands at 33 percent, equal to his all-time low in this poll and just 29 percent approve of the job Congress is doing -- a 14-point drop since Democrats took control in January, the newspaper said.

from reuters
Yet common political wisdom is "we just can't cut funding for the war". Why not? American's elected you to end the war. American's want funding cut. [American's want a national health care system.] Why is it that people with a straight face say that Hillary already has this?

The Huffington Post has learned that Senator Barack Obama, D-IL, raised a total of $20 million during the third quarter fundraising period, $19 million of which can be used for the primary election.

Obama's fundraising was aided by approximately 93,000 new donors who contributed to the campaign during the past three months. The decline in the money total was attributed to the traditionally slow fundraising months of July and August.

To date, the Obama campaign has raised more than $78 million, nearly $75 million of which is slated for the primary election. In addition, more than 350,000 people have donated to Obama since he announced his presidential candidacy.

The real news is the number of new donors. Those are people who never have donated before AND he can keep going back to.